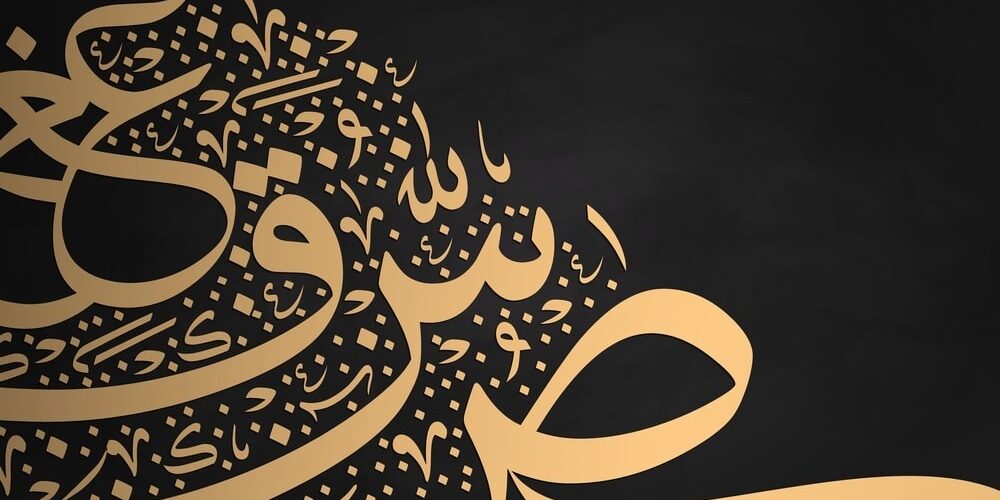 Arabic calligraphy is an ancient art form with a rich history that spans over a millennium. Its origins can be traced back to the 7th century with the advent of Islam. The earliest examples of Arabic calligraphy were found in inscriptions on the walls of the Kaaba, the holiest site in Islam, and on the early Islamic coinage.

The earliest form of Arabic script was known as Kufic, which is characterized by its angular and geometric shapes. Kufic script was used extensively in early Islamic manuscripts and architectural decoration. As the Islamic empire expanded, new forms of Arabic script were developed to suit different cultural and linguistic needs. The Naskh script, for example, was developed during the 10th century and is characterized by its clear and legible letter forms. It was used extensively in the production of Qurans and other religious texts.

Another important script, Diwani, was developed during the Ottoman Empire and is characterized by its ornate and cursive letter forms. It was used primarily in official documents and correspondence. Other styles such as Riq’a, Thuluth, and others have also developed over time.

During the medieval period, calligraphy was considered one of the most highly respected forms of art in the Arab world. Many great calligraphers, such as Yaqub Al-Musta’simi and Ibn Muqla, made significant contributions to the development of the art form. These calligraphers not only perfected different script styles but also established the rules and principles that are still used today.

Calligraphy and the spread of Islam: As the Islamic empire expanded, Arabic calligraphy played an important role in the spread of the religion. Calligraphers were often commissioned to produce copies of the Quran and other religious texts, which helped to disseminate the teachings of Islam throughout the empire. Calligraphy was also used to decorate mosques and other religious buildings, which helped to establish a visual language that was common to all followers of Islam.

Calligraphy and Cultural Exchange: As the Islamic empire expanded, it came into contact with a wide range of cultures, which led to the exchange of ideas and techniques. Calligraphers from Persia, Turkey, and other parts of the Islamic world contributed to the development of new styles and forms of calligraphy. Some of these styles, such as Diwani, have their origin from other cultures, but have been adapted to the Arabic script and became an important part of the Arabic calligraphy tradition.

Calligraphy and the Ottoman Empire: The Ottoman Empire, which existed from the late 13th to the early 20th century, had a major impact on the development of Arabic calligraphy. The Ottomans patronized the arts, and calligraphers were highly respected and held important positions in the court. They developed new scripts, such as Diwani, and established a high standard of excellence in calligraphy.

Calligraphy and the Modern Era: With the decline of the Ottoman Empire, Arabic calligraphy faced challenges in the modern era. However, it continued to be an important art form and has adapted to new mediums and technologies. Calligraphers have begun to use digital tools to create calligraphic designs, while calligraphic elements continue to be incorporated into graphic design and advertising. Furthermore, some contemporary artist have started experimenting with Arabic calligraphy as a means of self-expression, turning it into a form of modern art.

Calligraphy and Education: The tradition of teaching and learning calligraphy is still active today. There are many schools and institutions that teach calligraphy, and many calligraphers continue to pass on their knowledge and skills to the next generation. This ensures that the art form will continue to be studied and practiced for many years to come.

How to Use Arabic Calligraphy for Fun and for Class?
August 19, 2022

7 Facts About Arabic Calligraphy That Will Impress Your Friends
August 17, 2022
Search by Name
Recent Names